Today is officially Thanksgiving in McMurdo! In order to keep a regular work-week, our holiday feast here is pushed back to Saturday. Everyone in town is looking forward to one of the most special meals of the year, plus it is a rare two-day weekend which gives folks a chance to relax. While things are pretty quiet around town, many of the scientists on station (aka, ‘beakers’) are still doing their thing. But there are special events like the Turkey Trot race in the morning (some take it very seriously, while others show off special costumes), visits to the observation tube in the sea ice that you can descend to view Weddell seals in their under-water habitat, and hikes through some of the nearby volcanic features.

The last of us arrived in McMurdo on November 23rd, on the tail end of the DES drilling crews that have phased in since mid-October. We arrived to ‘fine’ Antarctic weather – clear and unseasonably warm – but mostly it ranges from cloudy, overcast or foggy, which is fairly typical in the coastal setting of McMurdo Sound. Temperatures are around 15-20 °F, but it feels chilly without direct sunshine. Although the sun is up 24 hours a day, in the afternoons it often clears up a bit and there is free flowing water on the dirt roads in town.

We’re thrilled that the RAID traverse launched on November 23rd! The excitement among the project coordinators, camp staff, traverse operators, and drill crews is palpable, and everyone is grinning from this early success. Optimism is running high. Kudos especially to Matthew, Colleen, Steve, and Beth here in town, and all of the DES crew. Everyone has worked together extremely well to get our ‘show on the road’. Three of our drill crew are out with the traverse group right now on their way to Minna Bluff, where we’ll set up camp at our test site.

One of the traverse sets leaves under the watchful eye of Mt Erebus. (photo by Ryan Wallace)

All ready to load up and move out! (photo by Ryan Wallace)

The traverse consists of our RAID drilling modules, small building modules, fuel bladders, and other cargo decks, all pulled by heavy tractors. From under the shadow of the Mt Erebus volcano, they headed across the McMurdo ice shelf toward White Island. On this traverse, the pulling is relatively easy over flat ground and one Cat tractor can pull four of our 5 RAID modules — a power module with twin Cat 500 kW generators (looks like a caboose), then the drilling fluid recirculation module, then the shop, and last one of the drill-rig or drill-rod modules. Whether modified from shipping containers, or built from the ground up, all are riding high and well on articulated skis. 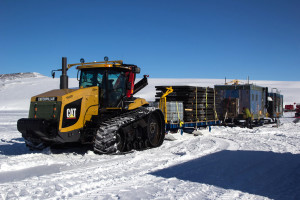 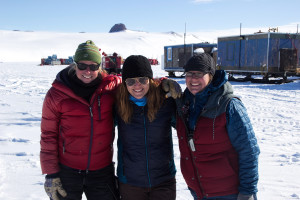 After lots of hard work to prepare, Shannon, Beth & Colleen cheer on the traverse. (photo by Ryan Wallace)

After departing from near Willy Field, the traverse made good time along the SPoT route, across large shear zones near White Island, and then branched off toward Minna Bluff. After three days travel, they made excellent time and got to within 30 km of the test site before pausing to go through the last shear zone. The traverse crew have ground-penetrating radar on the lead track vehicle that will help them pick their way through the shear zone, filling in crevasses and weak spots as they go, and they are due to arrive at the test location on Sunday. Camp staff and carpenter crews are then scheduled to go out on Monday to set things up, and the drilling rig will be positioned for a quick start.

On the ice shelf headed to White Island on the first day of the traverse from McMurdo. (photo by Ryan Wallace)

Our camp will consist of two small buildings on skis (think fish hut) for a galley and berthing for the camp crew, a couple of platform tents used as a main community space and berthing for the drillers, and the rest of us will camp out in small mountain tents. We will have a core group of about 15 people made up of drillers, camp staff, and our science team, and we expect a few visitors from time to time. Everyone will pitch in to help with equipment, cooking, cleaning and general camp duties.

The last of our group will fly out by helicopter at the end of the week to cap off the process of getting equipment and personnel out to the test site. I’m so grateful to everyone’s effort with RAID – we’re really close to schedule and there have been no major hiccups, so we’re all in good spirits and thankful for good progress so far. For now, the rest of us wait patiently in town for our signal to move out.